Captain...I Know How You Feel 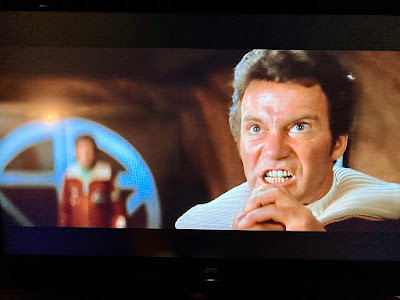 Last night, I did a little channel surfing as I wrote my blog. And what should appear on my screen? A classic scene from movie history.

It's easy to forget just how amazing Star Trek II, The Wrath of Kahn was. The first Star Trek film, if I recall correctly, was not well received. It was visually stunning, but the story--especially by today's standards--was just okay. They had a lot riding on the second film. Fortunately, for them, they hit it out of the park. They went back to their roots, story continuation from an original Star Trek episode. The next episode, like the first, wasn't as good (these are all my opinions, by the way...), but the fourth was epic.

The success of the films generated a number of new TV series, and additional movies. If Kahn had failed, it might have all ended there.

The look from the scene is iconic. It represents more than a man fighting his enemy--it's a visual representation of the wars we all face as we navigate this crazy ride through space. Basically, we've all been there. We've all been Kirk (without all the alien womanizing and killing, of course...). We've all fought Kahn. We've all got our own Kobayashi Maru.

Pray we'll be as successful as the Captain.

Without having to cheat, of course...

Remembering The Time I Was A Freestyle Gargoyle...Or, At Least, Read Like One 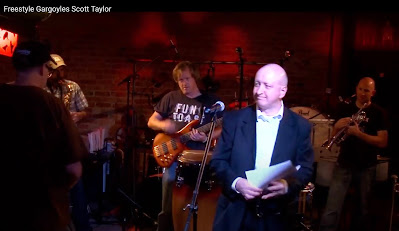 I remember entering the building not knowing what to expect, but I suppose, that was the point. 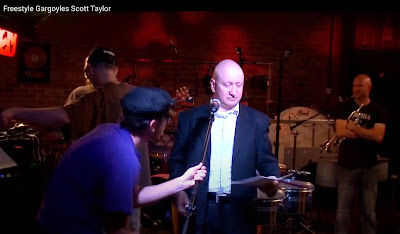 A few years ago, I had the honor of participating in a Freestyle Gargoyles event. What is Freestyle Gargoyles, you ask? Good question. Basically, authors read their own original works while an incredibly talented group of musicians provides an impromptu soundtrack. 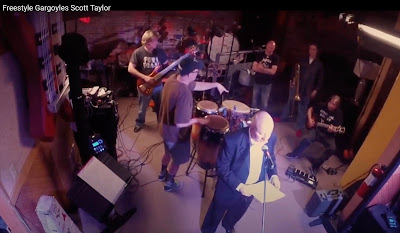 The organizer of this event is Craig Nybo, amazing author, musician, game creator, businessman, film festival emcee, and all-around good guy. He invited me to be one of the authors for that night's reading. 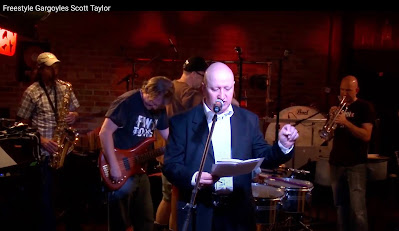 And I had a blast.

Craig posted on his Facebook page a link to my reading. If you're interested, the video lasts just over 13 minutes and you can access it by clicking: HERE.

If you do click on the video and watch it, I hope you enjoy it. It was fun to write and even funner to perform live. It's also an appropriate story for the Halloween season. Thanks, Craig for the opportunity, and thanks for the reminder of those good times. 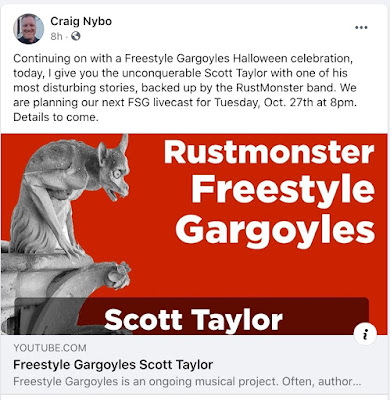 There's Always More To The Story... 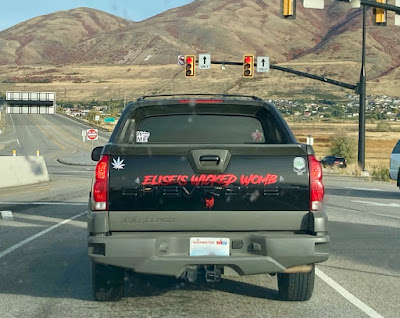 I snapped a picture the other day while out and about in Brigham City. A Chevrolet Avalanche with an interesting sign across the tailgate stopped in front of us. Now, a black truck-thing with several marijuana stickers is attention-grabbing in and of itself, but when that same truck has the words "ELISE'S WICKED WOMB" on it, well...that's something you just don't see everyday.

I posted the picture as my Pic Of The Day, and even tried a humorous caption. It generated several comments.

And I thought that was that.

But then, a friend did a little research.

Turns out, the back of a Chevy isn't the only place you'll see the words "Elise's Wicked Womb." If you run an internet search, you'll find the same Facebook post my friend did. In fact, I'll save you the search--you can access the website by clicking: HERE. If you're interested to learn more, and you click the link you'll find a site that sells repurposed dolls. And by "repurposed" I mean, transformed into...different things.

We all have different hobbies and interests. Many are artistically inclined. Some paint, others play music, others write stories, and others make baby vampire and demon dolls. When the need to create hits, you've got to answer the call.

I'm glad my friend took time to answer those questions I had but didn't get around to finding out. I have no need for the products Elise is selling, but I'm sure others do.

Signs In A Pizza Joint... 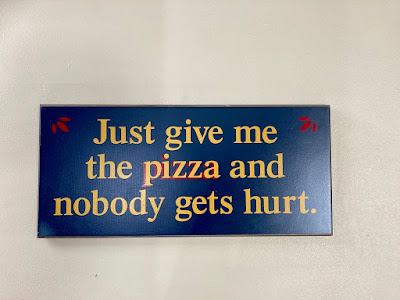 We're slowly getting to know the area. We've visited both local groceries stores, both local furniture stores, both local hardware stores, the post office, the city offices, the dry cleaners,  and a local restaurant or two. You can learn a lot about an area by visiting the places people go to shop. You can also find out a lot about the kind of people who own the businesses by what they hang on their walls. 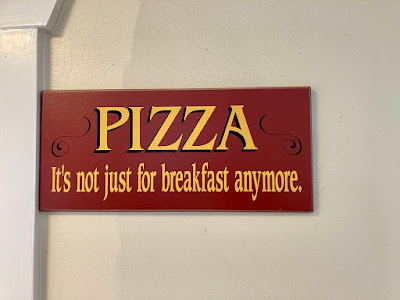 At the local pizza joint, Pizza Plus, home of their famous breadsticks (they are SO good...), they have a few things hanging on the walls. The one on top was the first one I saw, then I saw the others. I just had to get pictures of them. They also had several pictures of old Tremonton. That section of the restaurant didn't appear to be open. Next time I'm going to check out those pictures. I love seeing life the way it once was. 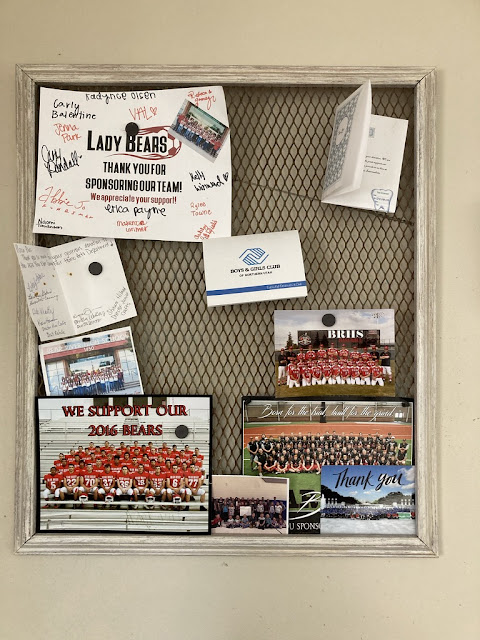 There was also a mini-shrine to a couple of Bear River High School athletic teams, specifically, the 2016 Bears football team, a baseball team, and some "thank yous" from the students. Funny...didn't see anything after Trump was inaugurated. Coincidence...? Maybe. 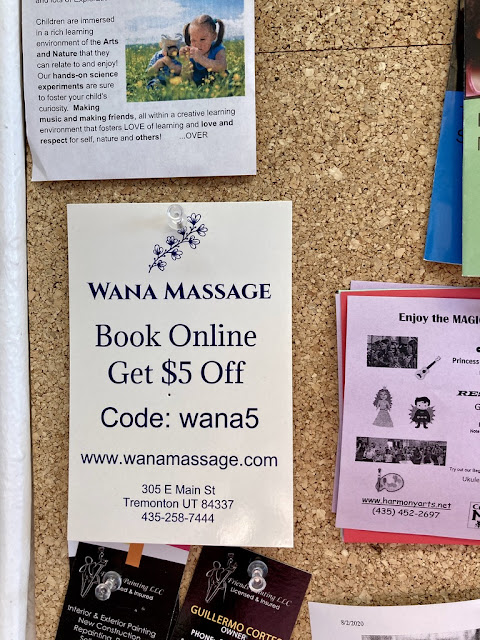 The restaurant had my daughter-in-law's business ad hanging up and I appreciate that. It's always good to spread the word. Yes--you can learn a lot about a community by the pizza joint they serve. Ours seems to be a fun place that offers great food and provides a fun place to eat. 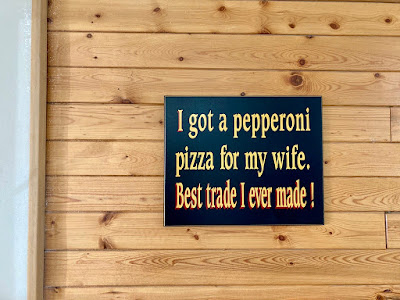 Within reason, of course...

What A Beautiful Day To Get Married... 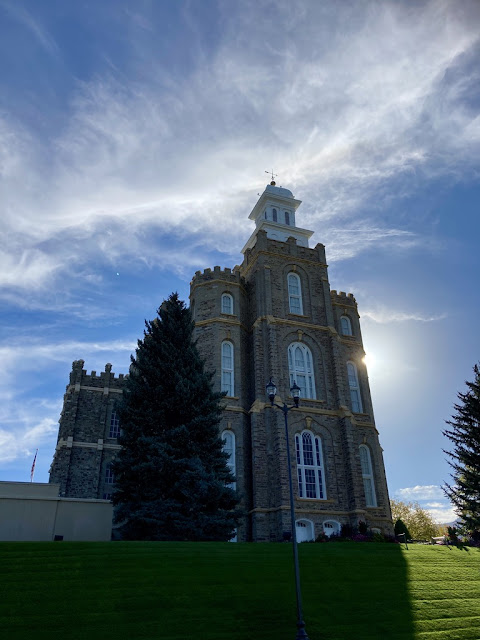 If you're familiar with Logan Utah in Cache Valley, you know it can be a volatile place in October when it comes to the weather. Many many years ago I lived in Logan from September to December, and I'll never forget walking up the hill to Old Main in December and having winds scream out of Logan Canyon--the cold went right through you, no matter what you were wearing. It was, and probably still is, one of the coldest places on earth.

So, when my son and his fiancee scheduled their wedding in October and we found out it was to be in the Logan Temple, well, you never know what kind of a day it would turn out to be. 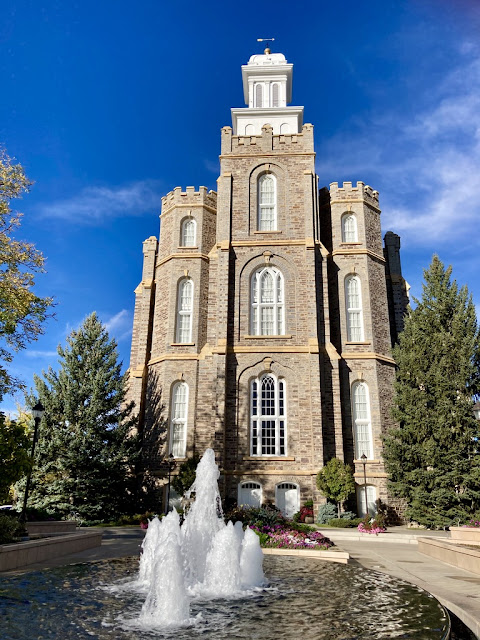 Turns out, this year anyway, the day was beautiful.

We had some time so we took a tour around the building. I couldn't get enough of the incredible sky. A storm did blow through a day or two earlier which cleared the air. It was almost as if the storm was sent specifically to give us that sky. Add the temple to that blue and white and you've really got something. 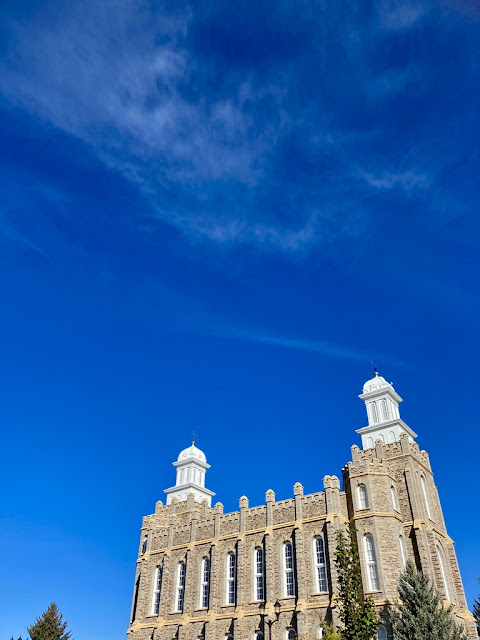 I have no idea if next year it will be as amazingly stunning--weather wise--as it was on September 13th of this year. There's a good chance it could be snowing.

But, if you know anything about Logan Utah in Cache Valley, the snowstorms themselves, can be heavenly. 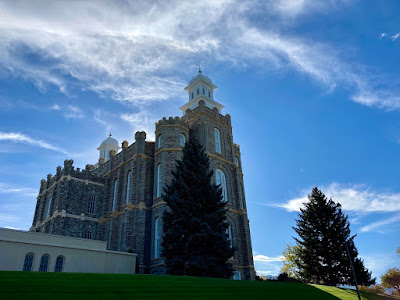 It's Not So Much About What I Think Of Them...But What Do They Think Of Me? 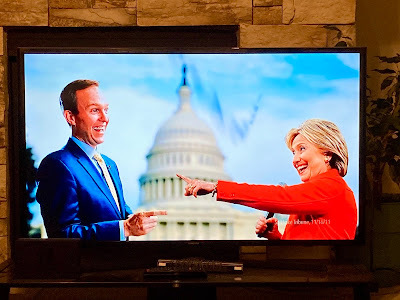 We don't watch a lot of network TV. There's many reasons for that, but during election season, there's an especially huge reason to not go there.

I am so so so so so so so sick of them, and I've really only been inundated by one race, a race outside of my district, a race where I cannot vote for either candidate. 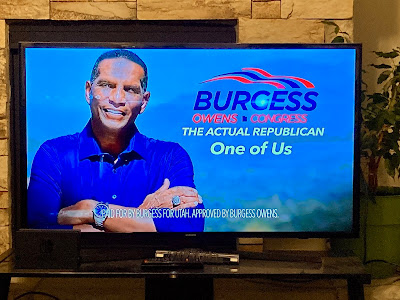 The incumbent Ben MacAdams, and the challenger Burgess Owens. 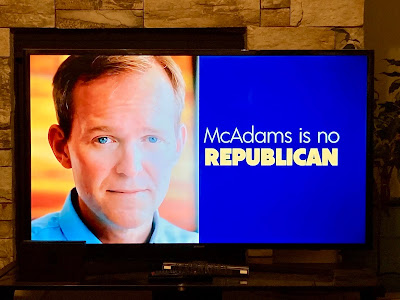 I don't know if their campaigns spend money on other time slots, but between 6pm and 7pm during Wheel of Fortune and Jeopardy, they are spending money like it's water. Every commercial break there's guaranteed, at least one attack ad from both candidates, and many times, there'll be multiple ads at each break from one or both.

Things I didn't know about Burgess Owens: He's bad with his own money--many bankruptcies. He also wants to start nuclear testing in the Nevada desert thus, killing scores of Utahns. He also wants to take away everyone's healthcare so when we do get cancer from the testing, we'll have to pay for it out of our own pockets. And, he's a republican. 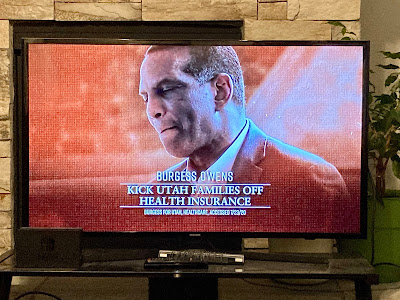 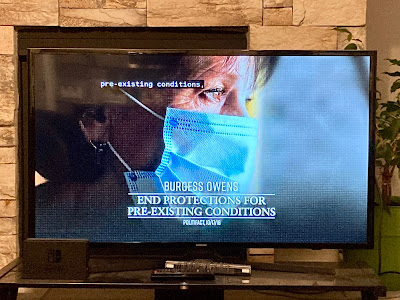 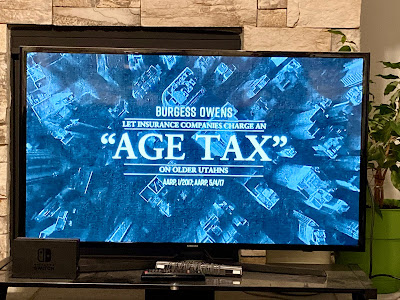 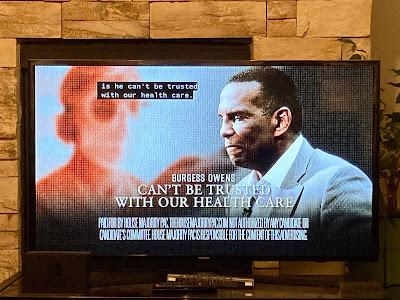 Things I didn't know about Ben MacAdams: He's bad with other people's money--lots of government spending. He also apparently loves China and wants their human rights abuses to continue. And, he's no republican, but a liberal. 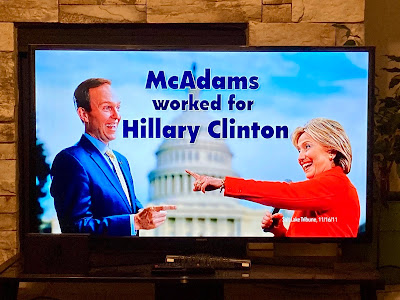 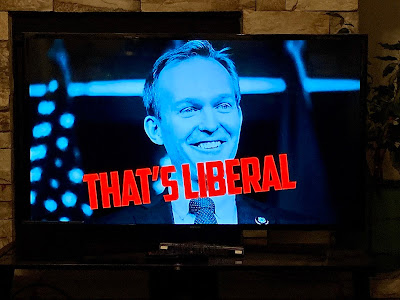 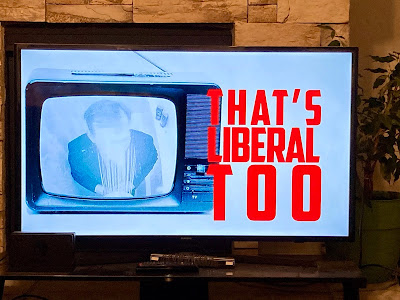 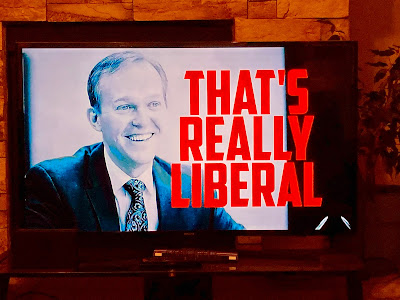 I know, I know, freedom of speech, and I have the freedom to not watch those shows. I also know a little bit about marketing.  Repetition helps to cement an idea into people's brains better. But, come on! After literally the thousandth time, I really don't know what difference it's making. I don't think many people will change their minds, but only make a person's opinion even stronger. Maybe they know something I don't. Then again, maybe they don't know something I do.

Thankfully, recording the show and fast-forwarding them on DVR helps. Can't watch anything live in this new world. I haven't even scratched the surface of all the terrible things these two men supposedly are and will do if elected/re-elected. I only highlighted two ads...there's dozens more.

The big question remains. It's not really a question of what I think of the candidates, but for me, after seeing these ads so much, the question seems to be morphing into what the campaigns think about the voter generally, and me specifically.

They must think I'm an idiot.

Email ThisBlogThis!Share to TwitterShare to FacebookShare to Pinterest
Labels: Ben McAdams, Burgess Owens, Can't Wait For The Elections To Be Over, So Tired Of Politics, Utah Politics 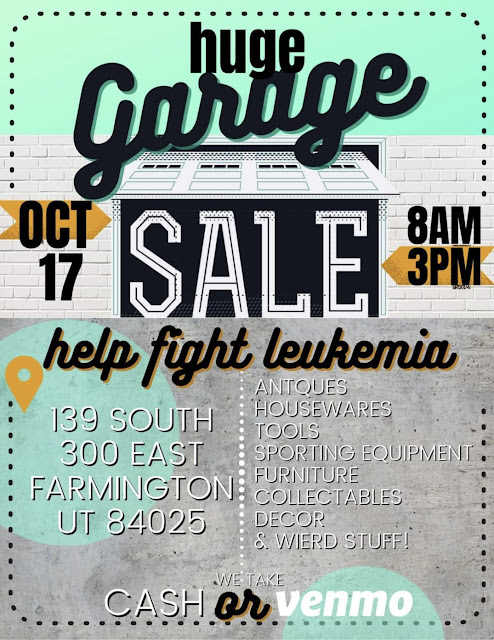 If you're in the Farmington area on Saturday, October 17th from 8am to 3pm, you might want to stop by this particular garage sale.

It's for the best cause possible--helping out a friend in need.

This is the neighborhood from which we recently moved. And I know if we still were there, I'd definitely stop in. First, I love garage sales. Second, I love checking out weird stuff. I know there will be weird stuff there because it's on the flyer. And Third, this is to help a neighbor's son who is fighting Leukemia. 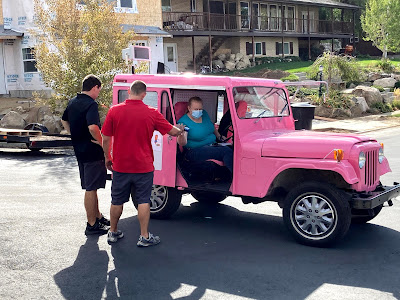 Also, if you knew the great people in this family, you'd want to help out as well. Plus, there's an added bonus--a real live pink ice cream truck from MoonBerry Sweet Treats will be there to provide much-deserved tastiness for the shoppers and lookers.

I don't know if we'll make it this Saturday, even though I'd love to go. But, if you see this and you'd like to help (or even get a tasty treat...), stop in and at least check it out. You'll be doing a good thing. 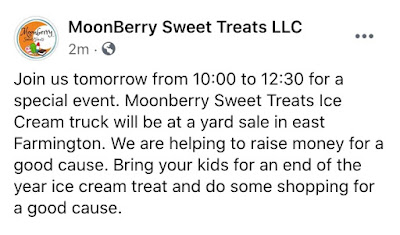