Orson Scott Card's "Shadow Of The Hegemon," And "Shadow Puppets"...Getting Lost In The Enderverse 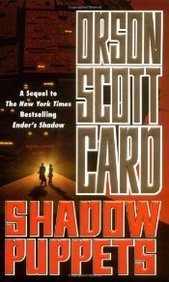 And I’m getting lost in the world.

A few months ago a friend and I were discussing all the Ender Wiggin's books written by Orson Scott Card. It's been years since I read the Ender's Series (Ender's Game, Speaker for the Dead, and Xenocide...) and we talked about how much we liked those books.

"Have you read the Bean series?" he asked.

"Yeah," he said. "The Bean books are my favorite books he's written."

I decided then to give those books another try. And I'm glad I did! I don't know if I can say I like this series more than the Ender's Series, but I do like them. I like getting lost in that world. I'm also reading the Formic Wars Series which starts the Enderverse.

The two books, Shadow of the Hegemon, and Shadow Puppets follow the lives of Bean, Petra (two soldiers who helped Ender Wiggin defeat the buggers...), Ender's brother Peter, and Peter's parents as they participate in a deadly game with Achilles, a truly despicable person bent on world domination and personal revenge. In the first book Bean saves the kidnapped Petra (I apologize for any spoilers...), and in the second book, the Bean and Petra get married and then are threatened once again by Achilles. An author's note at the end of Shadow of the Hegemon explains some of the thinking that went into the story, namely the political posturing of nations for control. Card mentions his love of the game RISK as a child. I can definitely see the influence of that game in these stories.

I'm not done--I've got a few more of the Ender's Shadow Series books on hold at the library and will hopefully be getting them soon. I can say, like J.R.R. Tolkien, had Card only created this one world, he would have been considered an amazing visionary writer (my opinion...), but if you're a fan of his other works, you know his abilities stretch far beyond the Enderverse.

On to the next! I've got to see how this thing ends.


* Photo used without permission from: https://www.goodreads.com/book/show/234724.Shadow_Puppets?ac=1