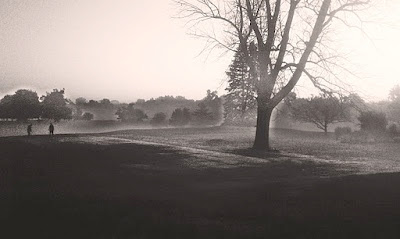 A fellow writer, Randy Lindsey (author in training... his website can be found: HERE), posted a short story for a weekly writing challenge he was entering. His delightful story intrigued me so I checked it out. It's creator is Nicole Pyles (her website's: HERE).

Here's the deal, the picture above is inspiration for the story. The story must be less than 500 words and include a number of randomly selected words, oh, and the story must be submitted by next Wednesday. This week's story must contain the words: File, Chair, Nest, Pirate, and Winner. I thought I'd give it a go, and here's the result. Enjoy!

“I’m sure you know why I called you,” Peter said as the morning fog dissipated in the white light of morning.
“I do,” Clark toned, his words dripping repulsion. “But why on earth did you want me to meet you in this hellish cold, and in a field of all places?” Peter's smile at Clark’s discomfort went unseen by the larger man.
“I thought it appropriate, considering the circumstances. Did you bring the file?” The question almost made Clark’s heart stop beating in his barrel-sized chest. He knew, Clark thought—his worst
fears confirmed.
“Uh, no…no I didn’t,” Clark finally said knowing he had lost, a winner no more. Any chance of Clark's plan succeeding disappeared as quickly as the particles of moisture rising in the warming air.
Peter waited to speak allowing his rival to wallow in his self-imposed anguish. A crow cawed from the nearby sycamore, a tree whose leaves had yet to bud for the upcoming arboreal year.
“I could go to the police,” Peter said finally as he stared across the expanse of the gray field before him. “You’re a pirate—a thief, and you know it. You stole corporate information from my company and you’re going to have to pay for the crime you…”
“What?!” Clark exploded cutting off the smaller man and causing the crow to leap into the crisp air and fly away. “What are you going to do to me? Huh? The death penalty? You going to hang me—give me the electric chair, the firing squad? You don’t scare me, you silly little man.” Clark turned from his once best friend and took a few steps away from the rising morning light. He didn’t want to give Peter the satisfaction of seeing him livid, seeing his fists shaking, seeing his teeth grind together, catching him in his lie.
“No,” Peter whispered looking down. “I won't do that...I won’t.” Though Clark stood several paces away, Peter’s weak words were clearly heard as they pierced the cool morning air. “Just bring the file back to the office and that will be the end of it.” Peter’s head remained down with the realization that his moment of revenge lacked the anticipated feeling of euphoria he desperately sought and was replaced with sorrow as he faced the fact that his friendship he once held dear was forever dead.
The two men looked at each other. Clark said nothing, but only nodded and began to walk away. As Clark left Peter stood alone, consumed by his thoughts, the sun rose in the east. No one noticed the crow return to the sycamore tree carrying a twig, a twig the black bird needed as it continued building its nest high in the tree that neither man knew was even there.
Posted by Hygge Man at 1:49 PM