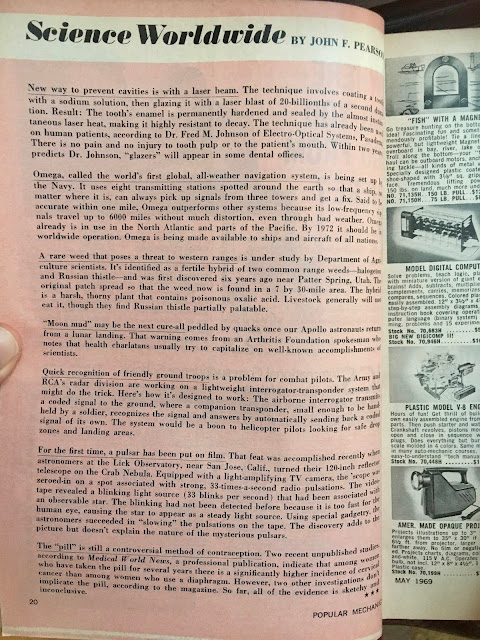 A few days ago I blogged about how excited I was finding an old magazine from 1969, but there was one page specifically, a collection of interesting scientific worldwide stories compiled by John F. Pearson, that made me realize just how much writing inspiration could be found from this one publication. After I found that one page, so much in the rest of the magazine seemed to become a potential writing topic. 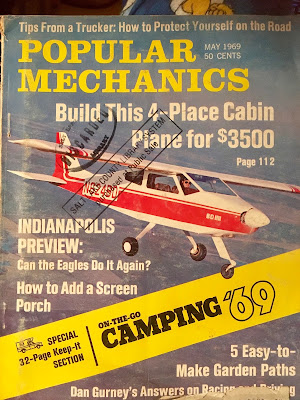 Here's the topics on that page:

New way to prevent cavities is with a laser beam

For the first time a pulsar has been put on film

The "pill" is still a controversial method of contraception

Each one of these topics made me think of some really good short stories. I realized as I looked through the pages that the magazine was printed during the Vietnam War. Its mentioned throughout, but not sensationalized or highlighted, only that it's happening. 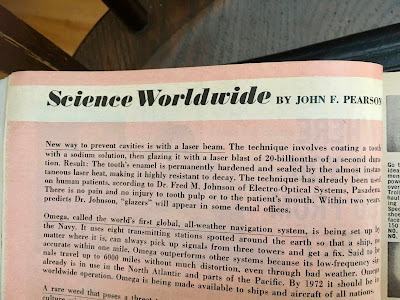 Some of my favorite topics--the runaway rare weed infecting the west, the potential Moon Mud scandals (especially since this was printed two months before Neil Armstrong and Buzz Aldrin set foot on the moon...), and the first global navigation system. Now, a global system seems so ordinary, but back then, it was revolutionary. Those were the ones I would choose, if given a choice.

I don't know if I will ever write some of these short stories, but I loved that this old magazine got the ideas flowing.
Posted by Hygge Man at 3:53 PM

Email ThisBlogThis!Share to TwitterShare to FacebookShare to Pinterest
Labels: More Writing Inspiration From 1969, Popular Mechanics May 1969