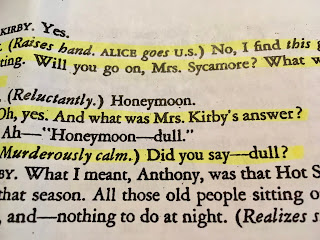 Maybe it's because I joined the show late, a replacement for someone who had to quit. I had three weeks to prepare, which is more than enough time to learn a dozen or so lines. Everyone was so supportive and helped me get up to speed, so that's probably not it. There's been something about this show--I occasionally find myself wondering if I'm going to forget those lines.

It's silly, mostly because before each show, I go through all my lines, one after another. I know them. I know them well, so I'm not sure why I doubt. Over the years I've been involved in a lot of shows. Due to my age and appearance and ability, I'm usually not cast as a lead, but I have been fortunate enough to have been trusted with some great roles. I've never really worried about the lines before.

During the last performance I missed two lines, or more specifically, I missed a few words in two lines. I got across the message of those lines and the other actors continued, but it made me realize, that even though I've memorized the lines, I'm not good enough to just go in cold--I've got to prepare and get into character. And I still need to focus, always focus.

Three shows, three more chances to entertain, to perform, and to give those who've spent good money on tickets their money's worth. And after tonight, it'll be down to two. 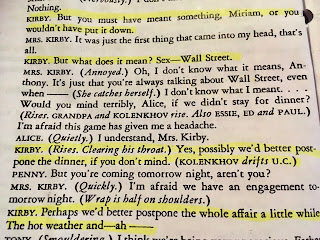 Email ThisBlogThis!Share to TwitterShare to FacebookShare to Pinterest
Labels: Breaking Character On Stage, CPT You Can't Take It With You, Memorizing Lines