The House At The End Of The Lane... 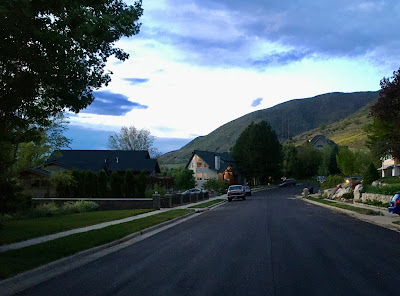 That A-frame house in the middle, it's a little cottage we built and moved into back in 2003. We wanted to build a log cabin, but it didn't work out, so we designed and helped build a cabin with everything but the logs.

It's also my piece of heaven on earth.

House and home have taken on new meanings this year. Structures, apartments, condos, trailers, even vehicles were always used for shelter, but now they're also churches, movie theaters, gyms, restaurants, and places where millions are working--and millions others, aren't. The places we used to return to are now places from which we seem to never leave.

Events change people. Now, when I see someone I haven't seen in a while, we ask how things are going. Another thing I find myself asking is if they're still working--such an odd thing to ask. Imagine, while conversing with a friend, asking if they're still employed, and if they say they are, that's one less thing they'll have to worry about, at least, for now.

In the house at the end of the lane is where I work and where I've worked for the past two years. I'm one of the lucky ones to still have a job. The house provides for my family. It comforts us, protects us, and allows us to remain together.

Back in 1970 my dad began building a house for his family. Unfortunately, he never saw it finished. Thirty-odd years later his son did the same thing only a few feet from where my father's house still stands. Dad's house served his family well. Ours is doing the same...the little house at the end of the lane.
Posted by Hygge Man at 9:17 PM

Email ThisBlogThis!Share to TwitterShare to FacebookShare to Pinterest
Labels: Church At Home, Farmington Utah, Our House, Quarantined, The House At The End Of The Lane